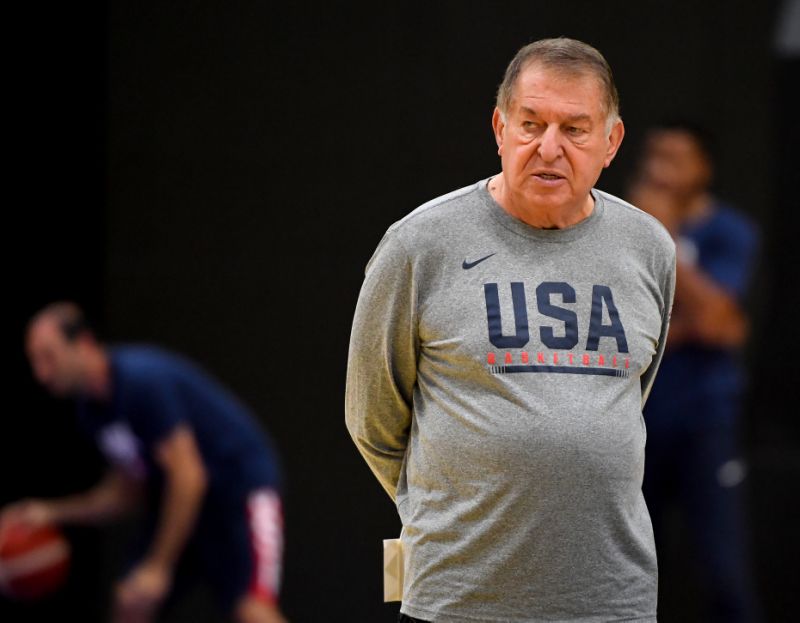 Team USA is going through its most embarrassing stretch in over a decade, as it will finish seventh at best in the 2019 FIBA World Cup.

After dropping games to France and Serbia — breaking a streak of 58 straight wins in non-exhibition games — Team USA will not medal for the first time since the 2002 FIBA World Championship.

USA Basketball managing director Jerry Colangelo pointed to player turnout as a reason for the disappointment and is making a note of it ahead of the 2020 Tokyo Olympics.

“I can only say, you can’t help but notice and remember who you thought you were going to war with and who didn’t show up,” Colangelo said, via ESPN. “I’m a firm believer that you deal with the cards you’re dealt. All we could have done, and we did it, is get the commitments from a lot of players. So with that kind of a hand, you feel reasonably confident that you’re going to be able to put a very good representative team on the court.”

Withdrawals were the story for Team USA

The FIBA World Cup is far from the radar of most basketball fans, but it kept creeping into the news because week after week, another NBA star would remove his name from consideration to play for Team USA.

First, it was Anthony Davis pulling out on July 15. Days later it was James Harden and Bradley Beal. And before long, players like Eric Gordon, Paul Millsap and Montrezl Harrell opted not to compete.

After starting with a roster full of 35 stars, the only players to remain on the 12-man roster were Kemba Walker, Khris Middleton, Harrison Barnes and Myles Turner. Eventually Team USA had to fill out its rotation with role players who come off the bench in the NBA like Mason Plumlee and Derrick White.

“The players did everything they can do,” Colangelo said. “They are a good group of guys. But we went in with higher expectations in terms of roster and it didn’t kind of happen the way we were hopeful and anticipating and expecting. That, to me, was a big disappointment.”

It’s worth noting that several key players had to withdraw because of injuries, which is hard to blame on them. Kyle Lowry battled a thumb injury and Kyle Kuzma suffered an ankle injury, but Team USA should still have been more than equipped to win the tournament. International basketball has greatly improved this century, but no other country had more than five NBA players on it, other than the US.

Would Colangelo actually leave off some stars?

The good news for USA Basketball after the FIBA World Cup is that because they will finish second among countries from the Americas, they’ve already qualified for the 2020 Olympics. No need to compete in more qualifying tournaments.

And Colangelo and Co. should have a greater pool of players to pick from. There’s little glory in the FIBA World Cup, especially after a long postseason, but players since 2004 have shown a willingness to log more miles in pursuit of a gold medal.

The question becomes whether Colangelo is serious about remembering “who you thought you were going to war with and who didn’t show up.” Stating the obvious, service to your country through basketball is very different from, you know, actual war, and Colangelo would be cutting off his nose to spite his face by uninviting NBA stars who sat out the FIBA World Cup.

“Going forward for USA Basketball, we’re going to need the cooperation of teams, agents, and then there has to be communication with players one-on-one to solidify those commitments,” Colangelo said. “I am going to be anxious to see how many players reach out early to indicate that they wish and want and desire to play.”

How Team USA handles its roster next year will be crucial to avoiding embarrassment again, but chances are there won’t be a starting five that includes Barnes and Joe Harris again.