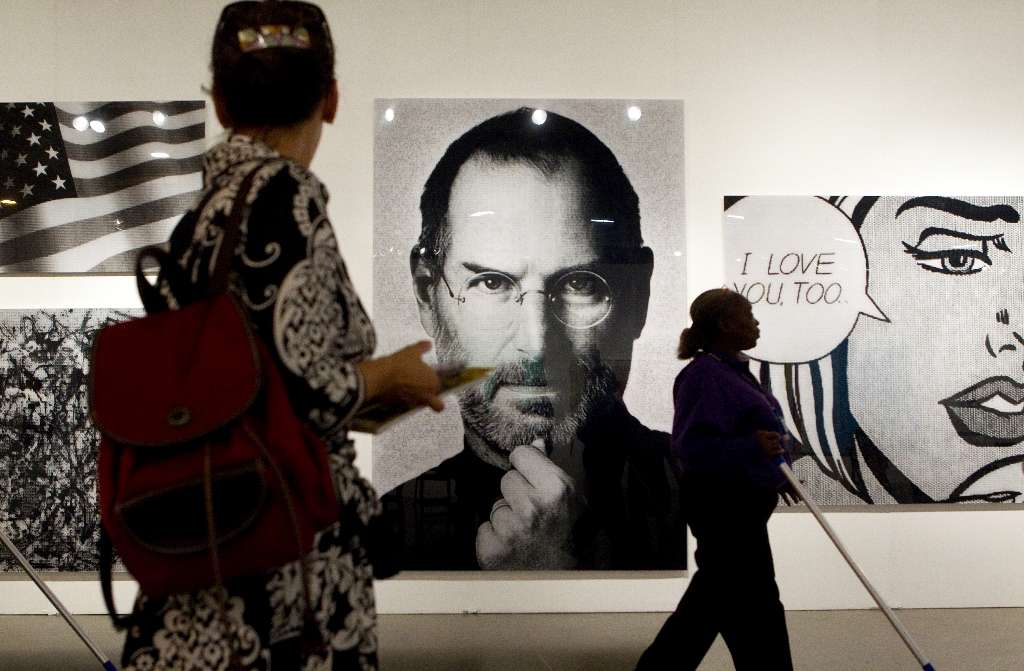 Laurene Powell Jobs – like the inventors and disrupters who were all around her – was thinking big. It was 2004, and she was an East Coast transplant – sprung from a cage in West Milford, NewJersey, as her musical idol Bruce Springsteen might put it – acclimating to the audacious sense of possibility suffusing the laboratories, garages and office parks of Silicon Valley.

She could often be found at a desk in a rented office in Palo Alto, California, working a phone and an Apple computer. There, her own creation was beginning to take shape. It would involve philanthropy . . . technology . . . social change – she was charting the destination as she made the journey.

She eventually named the project Emerson Collective after Ralph Waldo Emerson, one of her favorite writers. In time it would become perhaps the most influential product of Silicon Valley that you’ve never heard of. Yet at first, growth was slow. The work took a back seat to raising her three children and managing the care of her husband, Steve Jobs, as he battled the cancer that killed him in 2011 at age 56, followed by a period of working through family grief.

She inherited his fortune, now worth something like $20 billion, and became the sixth-richest woman on the planet. By 2014, Emerson Collective was up to 10 employees. “For the first few years I worked here, there would be people who would say, ‘Who?’ ” says the eighth hire, Anne Marie Burgoyne, director of grants. ” ‘Is there someone in the Valley who’s famous whose last name is Emerson?’ That seemed like a fair question. The Valley is a place of reputation, so it’s logical to ask whose last name is Emerson. Nobody knew who we were.

Powell Jobs, now 54, wanted it that way, and she wished she could stay out of the spotlight. She wrote a short essay on the sublimity of anonymous giving that she handed out to employees. One of her staff recently gave it to me to read but not to quote: Her policy on anonymity is anonymous. She was frequently seen but not heard – seated with Michelle Obama during the State of the Union address in 2012, vacationing with former District of Columbia Mayor Adrian Fenty, whom she dated a few years ago after he moved to California. When she did speak, she seemed most comfortable having wonkishly impersonal conversations at forums with, say, a Stanford entrepreneurship professor on the subject of “Injecting Innovation Into Intractable Systems,” or with musician Will.I.Am on “Art, Activism and Impact.”

All the while, she tended to Emerson Collective, quietly assembling a kind of Justice League of practical progressives: Arne Duncan, education secretary in the Obama administration, came on board to tackle gun violence in Chicago. Russlynn Ali, assistant education secretary for civil rights in the Obama administration, co-founded Emerson’s affiliate for education reform, the XQ Institute, where none other than storied urban fashion entrepreneur Marc Ecko has landed as chief creative and strategy officer. (“I feel like everything I’ve done up until this moment was for this reason,” the former T-shirt designer for Spike Lee and Chuck D told me.) Andy Karsner, assistant energy secretary for renewable energy in the George W. Bush administration, runs environmental programs. Jennifer Palmieri, communications director for Hillary Clinton‘s 2016 presidential campaign, consults on communications strategy. Dan Tangherlini, head of the General Services Administration under Obama (and D.C. city administrator under Fenty) is the chief financial officer. Peter Lattman, former deputy business editor of the New York Times, oversees media investments and grants. Marshall Fitz, former vice president of immigration policy at the Center for American Progress, runs immigration reform efforts.

Then, last year, Powell Jobs unleashed a series of dramatic moves across a three-dimensional chessboard of American culture. In July, Emerson Collective purchased a majority stake in the Atlantic, a 161-year-old pillar of the journalistic establishment. In September, an arm of the collective and Hollywood’s Entertainment Industry Foundation co-opted the four major networks in prime time to simultaneously present an hour of live television, featuring dozens of celebrities inviting the nation to reconceive high school. Over the following weeks, the collective partnered with the French artist JR to create two monumental pieces of guerrilla art on either side of the U.S.-Mexico border that went viral on social media as satirical critiques of the border wall. In October, she bought the second-largest stake – about 20 percent – in the estimated $2.5 billion holding company that owns the NBA’s Wizards, the NHL’s Capitals, Capital One Arena and several other sports ventures.

The pace continued this year. In February, Golden State Warriors star Kevin Durant announced he was committing $10 million to help create a Washington-area branch of a program that Powell Jobs had co-founded, which supports students to and through college in nine cities. In March, Emerson Collective helped bring director Alejandro Iñárritu’s shattering virtual-reality installation “Carne y Arena” – an immersive experience that simulates what it’s like for an immigrant to cross the border – to an abandoned church in Northeast Washington.

She had our attention now – but what was she doing? Emerson Collective did not appear to conform to traditional models of philanthropy. Its worldview seemed more or less clear – center-left politics with a dash of techie libertarianism – but its grand plan was unstated while its methods of spurring social change implied that simply funding good works is no longer enough. The engine Powell Jobs had designed was equal parts think tank, foundation, venture capital fund, media baron, arts patron and activist hive. Certainly, it was an original creation – and potentially a powerful one. “I’d like us to be a place where great leaders want to come and try to do difficult things,” Powell Jobs told me recently. “I think we bring a lot more to the table than money. . . . If you want to just be a check writer, you’d run out of money and not solve anything.”

Laurene Powell made her first foray into philanthropy near the beginning of high school in West Milford. She learned of the work of the Southern Poverty Law Center and dipped into her savings to send a cashier’s check of about $20. She got a form thank-you letter back from civil rights crusader Morris Dees. “They would reliably write to me a couple of times a year,” she says. “I would read them over and over, and they told really beautiful stories. I was always animated by the notion of who gets the opportunity and who doesn’t.”

Her father was a Marine Corps pilot who was killed in an airborne collision when she was 3. Her mother was left with four children under the age of 6 and not much money. She scrambled for ways to make ends meet, setting an example of “work ethic and commitment to focusing on what you need to do to be successful or, in her case, to survive,” Laurene’s older brother Brad told me. Laurene and her three brothers – two older, one younger – always had jobs. The local paper route was passed down from one sibling to the next. There was no money for the family to travel, so Laurene collected stamps of countries she would like to visit someday. (Their mother later married a school guidance counselor, and Powell Jobs has a younger sister and three stepsiblings from that marriage.)

“School was the thing that really worked for me,” she says. “I did well in school, and so it was a nice, positive, rewarding cycle for me to want to spend as much time there and to excel.” Fewer than half the students at her high school went on to college, according to Powell Jobs, but she and her brothers were determined. With student loans, multiple jobs, work-study and a small family commitment, she paid for enrollment in the University of Pennsylvania, where she studied economics, political science and French. “I know it in my core that, without that, I never would have had the opportunities that I have in my life,” she says. Education would become Emerson Collective’s seminal issue.”For the students who I work with, I understand that school is their way out,” she says. “It’s really their portal to anything larger than what they see around them. That was true for me.”

After Penn, she landed a job as a quantitative analyst with the fixed-income trading department at Goldman Sachs. “She was one of those people who interfaced between the super geniuses and the guys like me who were more normal,” Jon Corzine, who ran the fixed-income division before going on to become governor of New Jersey, told me. In other words, she translated esoteric research into strategies that traders and clients could use. “She was just a strong personality on the floor, because of her intelligence and her ability to relate to people.” At a time when there weren’t many women on the trading floor, Corzine says, she was one of a few “pioneers . . . who were prepared to deal courageously with a world that wasn’t always trying to assess people on the quality of their minds and performance.”

She loved the work but left within a few years; wanting to be an entrepreneur, she applied to the Stanford Graduate School of Business. One evening in October 1989, she and a fellow business school student arrived late for a guest lecture where nearly all the seats were taken. They sat in the aisle, then grabbed seats in the front row. The guest lecturer was led to the seat beside her. “I looked to my right, and there was a beautiful girl there, so we started chatting while I was waiting to be introduced,” Steve Jobs told biographer Walter Isaacson.

It had been Laurene’s friend’s idea to come to the lecture in the first place. “I knew that Steve Jobs was the speaker, but the face I thought of was that of Bill Gates,” she told Isaacson. “I had them mixed up.” After the lecture, Jobs invited her to dinner. They walked to a vegetarian restaurant in Palo Alto and stayed for four hours. In March 1991, when he was 36 and she was 27, they were married in a historic lodge in Yosemite National Park. “Steve and I were together for 22 years starting from the day we met and never apart,” she told me. “And it’s the greatest blessing of my life.”

Emerson Collective’s headquarters occupies three floors of a building on a corner in Palo Alto. The walls carry prints such as Dorothea Lange’s “Migrant Mother,” plus edgier fare such as Adam Pendleton’s room-length collage mural inspired by Malcolm X’s “The Ballot or the Bullet” speech. On a recent Monday, employees had flown in from across the country for a periodic day of all-hands meetings, when grants, investments, campaigns and strategies would be reviewed. The hushed hum of exam day prevailed.

Powell Jobs and I talked the next day in a conference room, where she explained how the collective, which has about 130 employees, works. “Really important is to be very, very close to the individuals, families and communities that we’re hoping to serve,” she said. “If we’re not listening to them, if we’re not thinking of how do we equip them with the tools to solve their own problems, if we don’t understand that actually the wisdom of the community far surpasses our own, then we’re in the wrong business. If people are in this building for more than a few days in a row and not out in the field, then we need to check each other.”