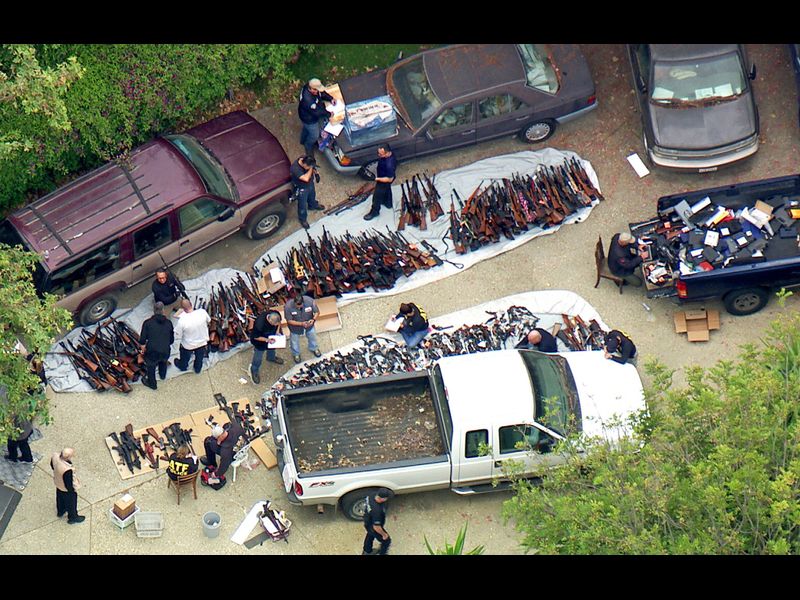 A man was arrested Wednesday after authorities seized more than 1,000 guns from a home in Holmby Hills, authorities said. Officials received an anonymous tip about a person illegally manufacturing and selling guns in a home in the 100 block of North Beverly Glen Boulevard, said Officer Mike Lopez, a spokesman with the Los Angeles Police Department. As part of an ongoing joint investigation, the Bureau of Alcohol, Tobacco, Firearms, and Explosives and the LAPD served a search warrant at the home at 4 a.m., he said. The ATF said in a statement that its agents searched the home after discovering an individual illegally selling firearms “outside the scope of the federal firearm license that the individual possesses.” The federal agency added: “ATF and LAPD have no reason to believe the public is in any danger.” The man’s name has not been released, but he was arrested on suspicion of unlawful transportation, and of giving, lending or selling an assault weapon, according to the LAPD. He is expected to be booked in the morning, authorities said.

More than a thousand guns were seized after federal agents searched a home in Holmby Hills, authorities said.

Video footage shows what appears to be ATF officials reviewing the trove of guns, most of which appear to be rifles and pistols, stacked on the floor. Officials can be seen going through and disposing of boxes and taking photographs of the evidence. Authorities also found a large amount of firearms manufacturing equipment and tools.

”Obviously it’s a lot,” Lopez said. “They’re going to be there a long time. Possibly even tomorrow.” Law enforcement sources said that multiple locations were searched Wednesday. A second home was searched on North Bunker Hill Avenue in Los Angeles. The Bel-Air mansion is described as a hoarder’s paradise. Court records show that the property is owned by Cynthia Beck, who has three daughters with J. Paul Getty’s son Gordon Getty. Beck bought the property in January 2001, but it remains unclear what, if any, connection she had to Wednesday’s events. Beck could not be reached for comment. As TV news helicopters hovered Wednesday evening, about a dozen reporters and photographers crowded around the small driveway waiting for updates from the LAPD. Traffic increased during rush hour, and drivers frequently paused to ask reporters what had happened at the home. Tour vans full of customers passed by as well, taking tourists to see the nearby Playboy Mansion and other celebrity homes in the upscale area. Hip-hop power couple Jay-Z and Beyoncé live in a mansion that sits less than a mile from where Wednesday’s incident occurred. Times staff writer Neal J. Leitereg, archivist James Kim and photographer Myung Chun contributed to this report.