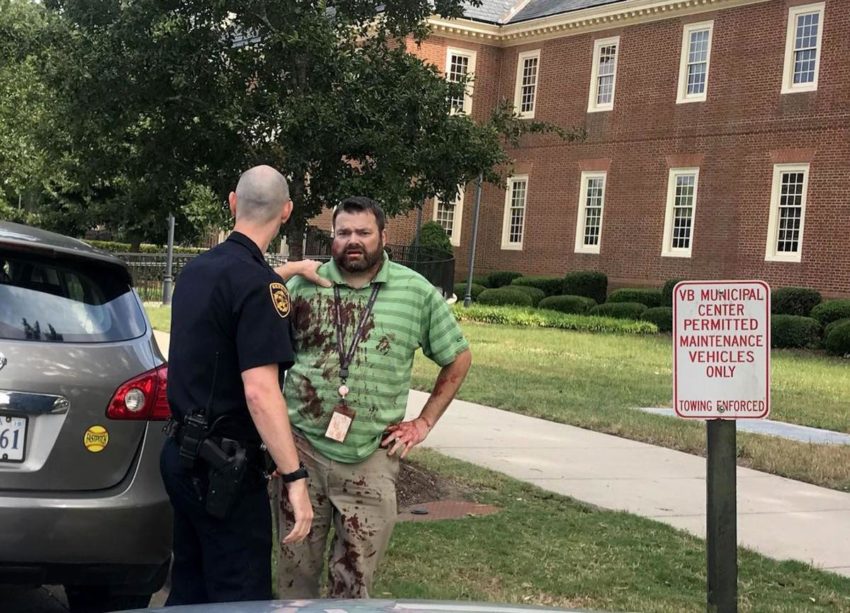 A longtime city employee shot and killed 11 people and injured six others after opening fire late Friday afternoon in the public works building where he worked, police said. The man was then killed by officers after firing at them.

One officer was shot during the exchange but was saved by his bulletproof vest, Police Chief James Cervera said during a news conference a couple of hours after the incident.

“This is the most devastating day in the history of Virginia Beach,” Mayor Bobby Dyer said as he opened up the news conference. “The people involved are our friends, co-workers, neighbors and colleagues.”

Friday’s rampage is believed to be the worst mass killing in Virginia Beach’s history. Prior to this week, a shooting on June 30, 1994, at the Witchduck Inn held that distinction: Four people — the business owner, two employees and a patron — were shot to death at the restaurant.

In the U.S., it is the deadliest attack since the November shooting at Borderline Bar & Grill in California, when 12 people were killed.

The shooter on Friday was a current employee of the public utilities department, Cervera said.

The gunfire began shortly after 4 p.m., just as workers were wrapping up their days and preparing to leave for the weekend. Building 2, where the shooting occurred, is next to City Hall and houses the planning, public utilities, public works departments, among others.

Megan Banton, an administrative assistant in the public utilities office where the man worked, said her supervisor heard a noise, then shouted for everyone to get down.

The supervisor then pulled Banton and others into her office, and shoved a desk against the door, while Banton called 911.

Virginia Beach PD@VBPD
ACTIVE SHOOTER SITUATION-municipal center, building 2. Multiple injuries. At this time it is believed that only 1 shooter, and they have been taken into custody. More to follow
Zand Bakhtiari was one of only five people left in the geographic information services department — located on the first floor of the building — at the end of the day Friday when his supervisor, who had left the office, texted to say there was an active shooter and to shelter in place.

Bakhtiari wasn’t nervous until he heard the gunshots – lots of them, one round in quick succession. He said it sounded like an automatic weapon.

“It was repeated, rapid gunfire,” he said. It sounded like it was coming from above or below him, on the second floor or the basement, he said.

After a few minutes — Bakhtiari doesn’t know how much time passed — the bullets stopped, but the fire alarm had been set off. And he could smell the gunpowder.

He assumed it was over when he heard the fire alarm, but he and his coworkers didn’t know whether to evacuate or stay put, so they all came out of their individual offices and huddled together in one.

After about 10 minutes, officers and SWAT team members came in, told them to duck down and keep their hands up as they escorted the employees out and checked every room.

Arthur Felton, an 18-year employee in the planning department, was also inside when the shooting started. He evacuated the building after a coworker heard gunshots.

“I never thought this would happen in my building,” Felton said. “The people who were shot — I’m sure I know most of them.”

Employees’ family members are being sent to Princess Anne Middle School to reunite with their loved ones.

Paul Swain’s fiancé sent him a text message at 4:17 p.m. that said, “they are shooting on my floor.” He said he sped to the Municipal Center so fast he was pulled over for speeding.

The officer let him go when he told him why he was driving fast.

Swain made it to the area but was directed to reunite with his fiancé at Princess Anne Middle School.

“My heart is just pounding,” he said as he was waiting to see his fiancé again.

The police did not allow media on the school’s property. When he walked into the school, he said he was greeted by staff who had a checklist of names. He said people were waiting for their families in the cafeteria.

He was glad to know his fiancé was alive before he walked in there.

Amy Woody is trying to find her neighbor of 20 years who didn’t come home from her job at the city. She said her neighbor always returns home around 4 p.m. but she wasn’t answering her text messages or phone calls. Woody arrived at the school shortly after 8:30 p.m. with her two dogs.

“I just want to make sure she is OK,” she said. “It’s definitely a very solemn feeling right now. It’s hard.”

Cheryl Benn rushed to the school after getting a frantic call from her husband, David, who is a traffic engineer and works in the building. At first all she could hear when he called was sirens.

She said her husband barricaded himself in a room away from the shooter and held the door shut until police told him it was safe to leave.

“He was definitely a little freaked out,” Benn said.

While her husband gave detectives a statement, Benn waited outside the school with her dog.

“Some of those people could be his coworkers,” she said.

Public Works spokesman Drew Lankford, who works in the Operations building, left the office on Friday afternoon to get a haircut. While he was gone, his daughter called and said there had been a shooter in his work building.

His daughter, who works in the City Hall building, said security told everyone to get under their desks. He rushed back to the office and saw cops taking cover behind parked cars with their guns drawn.

At scene of active shooter situation in Virginia Beach. Lots of officers taping off portions of this street, many with rifles drawn. @virginianpilot 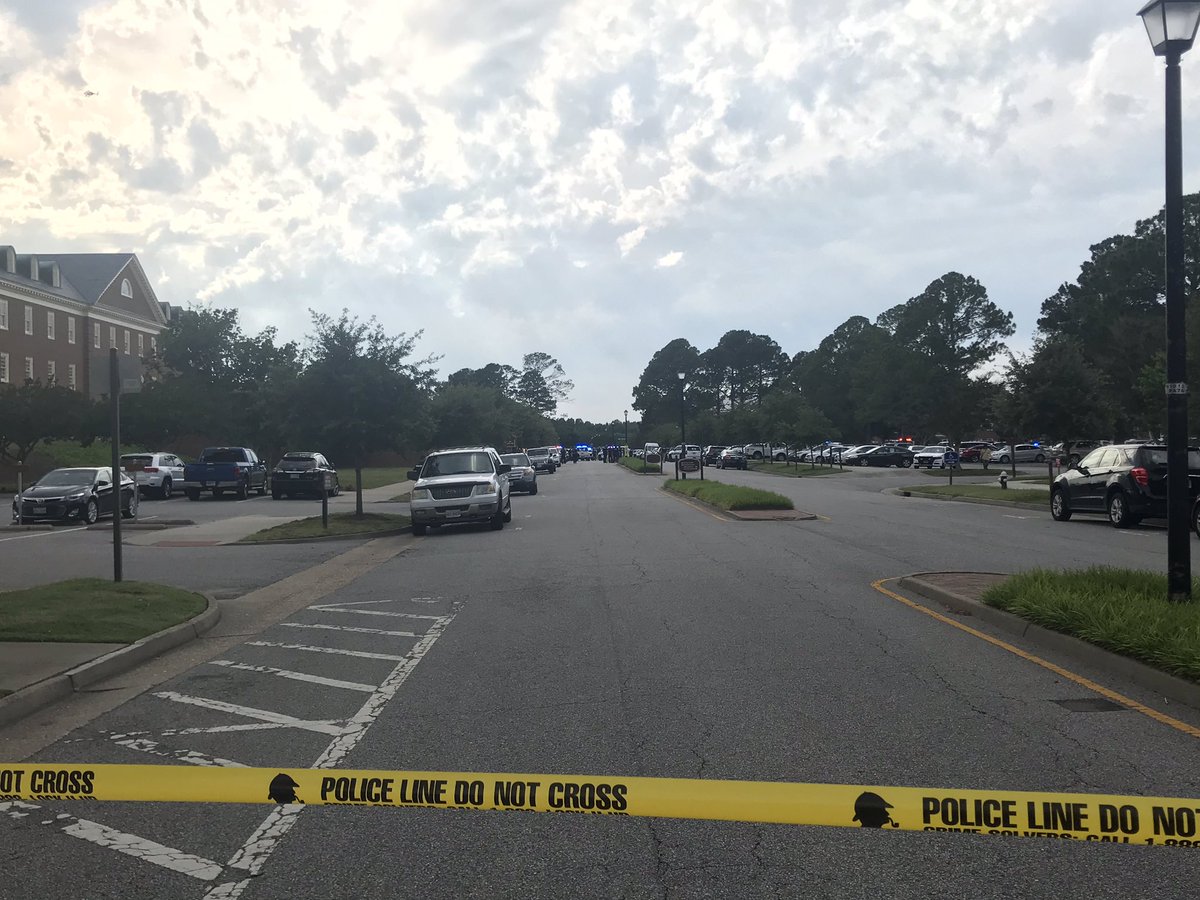 Frantic scene here. A woman I just talked to was waiting outside building 1 in her car where city manager, city clerk and city attorneys offices are. Her daughter was inside paying a parking ticket when the shooting happened.

City Councilwoman Barbara Henley had just pulled up to the City Hall building just after 4 p.m. to pick up the agenda as she does every week when she heard sirens and saw police cars.

“I thought it was an accident,” Henley said.

As she parked her car in the lot between Building 1 and 2, she noticed city employees standing outside using their cellphones. Someone told her there was a shooting and she should leave. Henley had gotten back in her car when she heard a male voice shout, “Get down!”

“I was scared to death,” Henley said.

Henley said she’s never seen a situation like this before at the Municipal Center, adding that security has recently been “beefed up” in the City Hall building as a result of shooting incidents across the nation, but that some of the other municipal buildings do not take the same security measures.

This is a developing story. Please check pilotonline.com for more details.