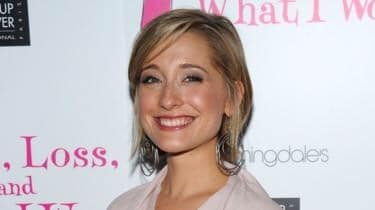 Allison Mack, a US actress known for the TV show Smallville, has appeared in court on charges of aiding a sex trafficking operation disguised as a mentoring group.

Keith Raniere, the leader of the so-called self-help group, was arrested by the FBI in Mexico in March.

Ms Mack is accused of helping him to recruit women who were then exploited “both sexually and for their labour”, the New York prosecuting attorney said.

She pleaded not guilty to all charges.

At a brief hearing on Friday evening in a Brooklyn federal court, the judge ordered Ms Mack, 35, to be held in custody. She will appear in court again on Monday.

The society was supposed to empower and strengthen the women who joined it, according to prosecutors.

But they allege Mr Raniere oversaw a “slave and master” system in his group called Nxivm, where female members were expected to have sex with him and were branded with his initials.

“Allison Mack recruited women to join what was purported to be a female mentorship group that was, in fact, created and led by Keith Raniere,” Richard Donoghue, US attorney for the Eastern District in New York, said in a statement.

Prosecutors allege that Nxivm has the features of a pyramid scheme, in which members pay “thousands of dollars” for courses to rise within its ranks.

“Mack directly or implicitly required her slaves… to engage in sexual activity with Raniere,” the statement from the attorney’s office claims.

“In exchange for this, Mack received financial and other benefits.”

If found guilty, both Ms Mack and Mr Raniere, who has been charged with sex trafficking and is being held without bail, face at least 15 years in prison.