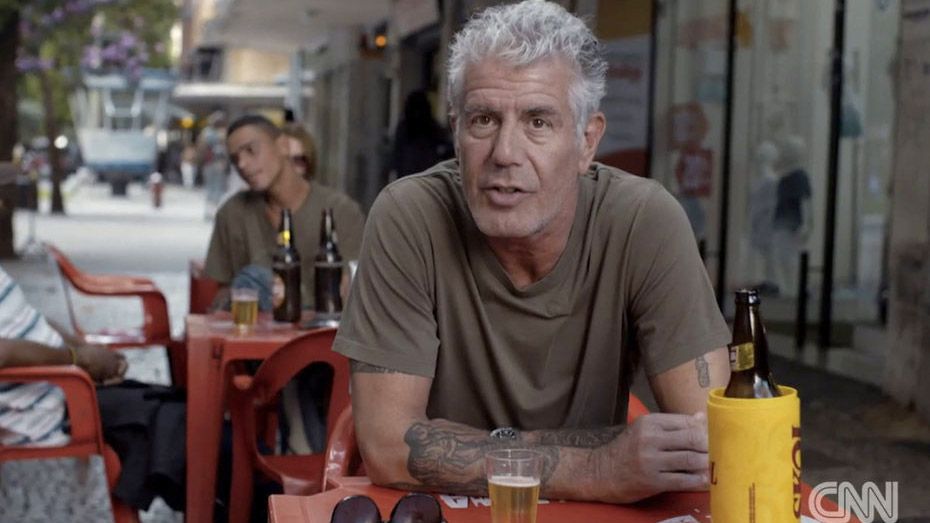 Asia Argento says she is ‘devastated’ after the unexpected death of her boyfriend Anthony Bourdain, who was found dead from a suicide on Friday.

In a statement posted to Twitter, the actress, 42, remembered the 61-year-old celebrity chef as ‘brilliant’ and her ‘protector’.

‘Anthony gave all of himself in everything that he did. His brilliant, fearless spirit touched and inspired so many, and his generosity knew no bounds. He was my love, my rock, my protector. I am beyond devastated. My thoughts are with his family. I would ask that you respect their privacy and mine,’ Argento wrote.

The statement came hours after Argento posted an image to her Instagram story that seemed to allude to Bourdain. In it, she wore a shirt with an image of Sid Vicious on it, one of Bourdain’s idols, and the wording ‘f*** everyone’. She then wrote over the image: ‘You know who you are’. That picture, which was posted just two hours before the public announcement of Bourdain’s death, was later deleted by Argento.

Bourdain, a recovering cocaine and heroin addict, hanged himself while staying at the Le Chambard hotel in Kaysersberg, France, where he was filming an upcoming episode of his CNN show Parts Unknown, according to French media.

Twice-divorced Bourdain met Argento when they shot an episode of Parts Unknown in December of 2016, shortly after he broke up with his second wife, MMA fighter Ottavia Busia – the mother of his only child.

But lately, there had been speculation about whether the couple were still together. On Monday, Argento was pictured walking around Rome with journalist Hugo Clement. The two were photographed laughing and hugging. This was also just days after Bourdain bought a moody painting with the ominous title ‘The world is falling down, I am learning to live with it’.

Bourdain and Argento’s social media accounts, however, paint a picture of a couple still very much in love. Just two weeks ago, they posted the same loved of picture of them together in Firenze, Italy, shooting another Parts Unknown episode together.

And in a February interview with People, Bourdain gushed about being ‘happy in ways I didn’t think I ever would be’ thanks to being with ‘somebody really strong’ – an apparent reference to Argento.

But it was also during the same interview in which he said his daughter was his main reason to live. After Ariana was born in 2007, Bourdain said he felt ‘some responsibility’ to ‘at least try to live’.

‘There have been times, honestly, in my life that I figured, “I’ve had a good run – why not just do this stupid thing, this selfish thing… jump off a cliff into water of indeterminate depth,”‘ he said, referencing a thrill-seeking act he did for his former Travel Channel show, No Reservations.

‘In retrospect, I don’t know that I would do that today – now that I’m a dad or reasonably happy,’ he said.

Bourdain also said he knew he was ‘going to pretty much die in the saddle’ because he wouldn’t ever retire.

‘I gave up on that. I’ve tried. I just think I’m just too nervous, neurotic, driven,’ he said.

Argento was one of the many women who came forward to accuse Harvey Weinstein of sexual assault last year.

When she told her story to the New Yorker in October, Bourdain praised her on Twitter, writing: ‘I am proud and honored to know you. You just did the hardest thing in the world.’

He continued to be one of the most outspoken male supporters of the #MeToo movement.

‘Anthony was a dear friend,’ Ripert later told the New York Times. ‘He was an exceptional human being so inspiring and generous. One of the great storytellers of our time who connected with so many. I wish him peace. My love and prayers are with his family, friends and loved ones.’

‘At this stage nothing suggests the involvement of a third party,’ the prosecutor said, adding that ‘a doctor at the scene’ had confirmed Bourdin’s death by hanging.

‘It is with extraordinary sadness we can confirm the death of our friend and colleague, Anthony Bourdain,’ CNN said in a statement Friday morning.

‘His love of great adventure, new friends, fine food and drink and the remarkable stories of the world made him a unique storyteller. His talents never ceased to amaze us and we will miss him very much. Our thoughts and prayers are with his daughter and family at this incredibly difficult time.’

CNN President Jeff Zucker added in a company-wide email: ‘Tony was an exceptional talent. Tony will be greatly missed not only for his work but also for the passion with which he did it.

Celebrities and average Americans alike mourned Bourdain’s loss on Twitter on Friday, including Chrissy Teigen and Gordon Ramsay. Even President Trump commented on his passing, telling reporters Bourdain’s death was ‘very sad’ as he departed the White House for the G-7 summit.

Last year, Bourdain said in an interview with the New Yorker that he had blacked out in a restaurant in France and would happily return to abusing heroin if he ever had ‘a bad chest X-ray’.

The interview will be among evidence read by Mr De Rocquigny du Fayel and judicial police as they investigate his sudden demise.

The New Yorker interview describes how Bourdain had improved his health after relying on heroin for many years, but collapsed in France soon after making an episode of ‘Parts Unknown’ in Vietnam.

He was in the southwest seaside resort of Arachon in around 2014 or 2015, and had taken a ‘battery of painkillers and anti-inflammatories’.

The article by Patrick Radden Keefe reads: ‘After impulsively swallowing a week’s supply, Bourdain realized that he had not eaten in thirty-six hours.

‘He drove to a café in a nearby town, Arcachon, and ordered spaghetti and a bottle of Chianti. He was halfway through the wine when he realized that he was sweating through his clothes. Then he blacked out.’

Bourdain survived the incident, but the article recalls how his father, music producer father Pierre Bourdain, died of a stroke in 1987, aged just 57.

The article reads: ‘Bourdain often thinks about dying; more than once, he told me that, if he got “a bad chest X-ray,” he would happily renew his acquaintance with heroin.

‘Taking meds and booze on an empty stomach was just a foolish mistake, but it left him shaken.’

After Bourdain’s death on Friday, Keefe recalled his time interviewing Bourdain for the profile, and said he remembers ‘dark threads running through our conversations’.

‘Bourdain freely acknowledged that part of the reason he continued to work at such a frantic pace might have been a fear about where his mind might go if he ever sat still.

‘Any facile notion I might have entertained about writing a light-hearted portrait of a man with a dream job was, upon meeting Tony, quickly overtaken by a sense that he wasn’t content – that, in all that globe-trotting, he was chasing something that would forever elude him,’ Keefe wrote.

He told the New York Times that he last spoke to Bourdain about a month ago and he seemed to be doing well.

‘He told me he’d never been happier. He felt that he had finally found his true soul mate in Asia,’ Zimmern said.

But Zimmern ‘had some indication that perhaps there was more going on,’ the story says.

‘Things on the surface never seemed to add up or make sense,’ he told the paper.