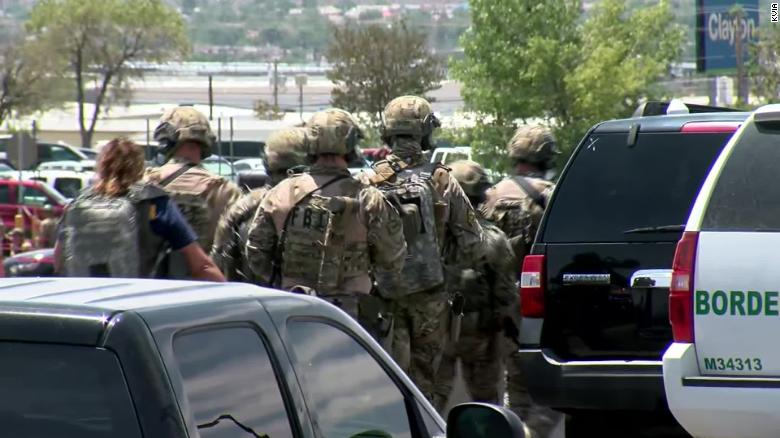 A 17-month-old girl was among the 22 injured in a shooting rampage around Odessa, Texas, as the death toll increased to seven victims Sunday.

Anderson Davis suffered shrapnel in her right chest, has a hole through her bottom lip and tongue, and had her front teeth knocked out after being shot in the face, according to a GoFundMe page created by a family friend. Eric Finley, marketing director of Texas’ UMC Health System, said Anderson was in satisfactory condition at a hospital in Lubbock.

“She is alive. When others today are not alive,” Anderson’s mother said in a statement shared on the GoFundMe page. “I ask you to continue praying for our hearts as we experience this, pray for complete healing of Anderson, pray for every other family in our same situation, or worse, today and pray for the shooters. Pray that whatever is causing them to do this will be defeated by God and they will stop shooting.”

GoFundMe verified the page’s authenticity to NBC News and said the fundraising platform is working with the campaign organizer to ensure funds are sent directly to the family.

The rampage began after the suspect, in a gold Honda, was the subject of a 3:17 p.m. traffic stop between Midland and Odessa, officials said Saturday. The gunman shot the trooper who initially stopped him and continued west to Odessa, where he shot multiple others, according to Odessa Police Chief Michael Gerke.

“You’ll notice that I’m not naming this subject and there’s a reason for that. I refuse to,” Gerke said during a press conference Sunday. “I’m not going to give him any notoriety for what he did.”

There is no known motive at this point in the investigation, officials said Sunday, but they added this did not seem to be an act of either domestic or international terror.

Officials did describe the suspect as a white male in his mid-thirties who appeared to have a criminal history. Gerke said there were no active warrants for him at the time of the attack.

Officials said the gunman went on into the Odessa area and continued to shoot innocent civilians. The suspect then ditched the vehicle he was using and took a U.S. Postal vehicle to a local movie theater, Cinergy, where a shootout with law enforcement from multiple agencies took place, he said.

A state trooper, an Odessa police officer and a Midland police officer were injured but in stable condition, the Texas Department of Public Safety said Saturday.

Police have not released the identities of the victims in the attack but said that they range in age from 15 to 57.

An Odessa High School student was among the seven who were killed, the Ector County Independent School District confirmed to NBC News Sunday.

A senior law enforcement official briefed on the case and a spokesperson for the Texas Department of Public Safety said the shooter had a rifle that may have been a .223 AR-15 style weapon. Police confirmed Sunday that the shooter had a “AR-style” weapon.

Officials were also trying to determine whether the suspect had other weapons on him during the shooting or at his home.

Texas Gov. Greg Abbott said Sunday that he was heartbroken for the state, which also recently lost more than 20 people after a suspected shooter opened fire in a Wal-Mart in El Paso on Aug 3.

“I’m tired of the dying of the people of the state of Texas,” Abbott said. “Too many Texans are in mourning, too many Texans have lost their lives. The status quo in Texas is unacceptable and action is needed.”

Pushed on whether Texas gun laws are too relaxed, Abbott responded that he was meeting “daily” with victims, community members and legislators to offer “new and different” solutions. The governor did answer whether he believed AR-style weapons should be banned when asked directly.

“We are going to look at every issue, there is no issue that we will not look at,” Abbot said. “And we are going to be working with legislators to see what the best solutions are for Texas.”

The attack, the second mass shooting in Texas this month, prompted a round of calls for stricter gun laws from some hopefuls running for the Democratic nomination for president.

U.S. Sen. Kamala Harris, D-Calif., said on Twitter, “America is sick of this. We need to act.”

Former Congressman Beto O’Rourke of El Paso, Texas, where 22 people were killed in an Aug. 3 attack at a Walmart, tweeted, “More information is forthcoming, but here’s what we know: We need to end this epidemic.”

U.S. Sen Elizabeth Warren, D-Mass., said on Twitter that the violence makes her “heartsick.” “We’ve already lost far too many to gun violence-Congress must act now,” she said.

President Donald Trump was briefed on the attacks and had been monitoring the situation, White House communications officials said.

“Great job by Texas Law Enforcement and First Responders in handling the terrible shooting tragedy yesterday. Thank you also to the FBI, @GregAbbott_TX and all others,” Trump tweeted Sunday morning. “A very tough and sad situation!”

Trump was set to depart for Poland over the weekend but remained in the U.S. to oversee the response to Hurricane Dorian, which strengthened to a Category 5 as it threatens the eastern seaboard.