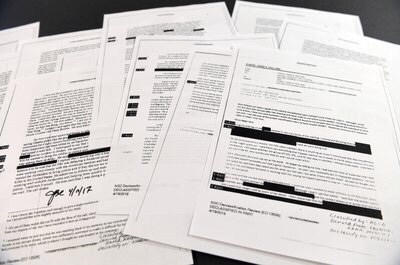 What’s he going to say this time?

In a series of startlingly candid conversations, President Donald Trump told former FBI Director James Comey that he had serious concerns about the judgment of a top adviser, asked about the possibility of jailing journalists and described a boast from Vladimir Putin about Russian prostitutes, according to Comey’s notes of the talks obtained by The Associated Press on Thursday night.

The 15 pages of documents contain new details about a series of interactions with Trump that Comey found so unnerving that he chose to document them in writing. Those seven encounters in the weeks and months before Comey’s May 2017 firing include a Trump Tower discussion about allegations involving Trump and prostitutes in Moscow; a White House dinner at which Comey says Trump asked him for his loyalty; and a private Oval Office discussion where the ex-FBI head says the president asked him to end an investigation into Michael Flynn, the former White House national security adviser.

The documents had been eagerly anticipated since their existence was first revealed last year, especially since Comey’s interactions with Trump are a critical part of special counsel Robert Mueller’s investigation into whether the president sought to obstruct justice. Late Thursday night, Trump tweeted that the memos “show clearly that there was NO COLLUSION and NO OBSTRUCTION.”

The president also accused Comey of leaking classified information. The memos obtained by the AP were unclassified, though some portions were blacked out as classified. Details from Comey’s memos reported in news stories last year appear to come from the unclassified portions.

In explaining the purpose of creating the memos, which have been provided to Mueller, Comey has said he “knew there might come a day when I would need a record of what had happened” to defend not only himself but the FBI as well.

The memos cover the first three months of the Trump administration, a period of upheaval marked by staff turnover, a cascade of damaging headlines and revelations of an FBI investigation into potential ties between the Trump campaign and Russia. The documents reflect Trump’s uneasiness about that investigation, though not always in ways that Comey seemed to anticipate.

In a February 2017 conversation, for instance, Trump told Comey how Putin told him, “we have some of the most beautiful hookers in the world” even as the president adamantly, and repeatedly, distanced himself from a salacious allegation concerning him and prostitutes in Moscow, according to one memo.