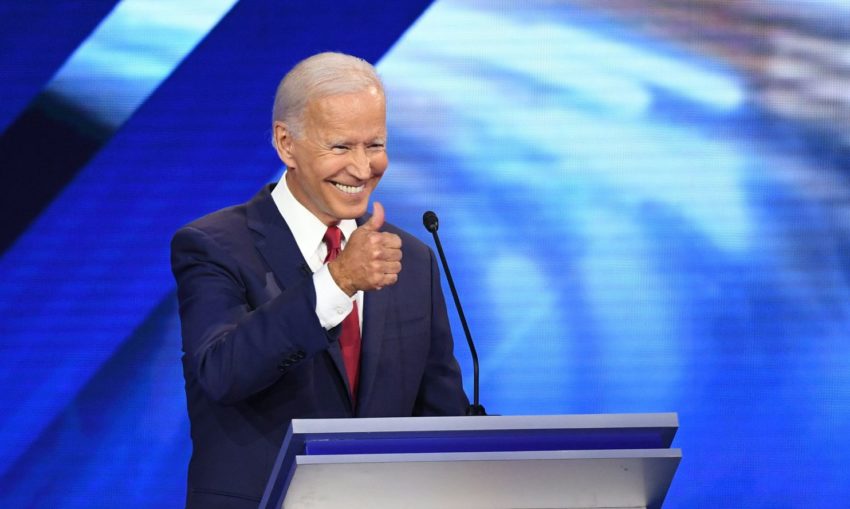 Ah, the fifth-third debate! (Do not let anyone tell you you only see three debates. I have been there with you, and there have been five.) Andrew Yang announced he would give away thousands of dollars to a few lucky viewers. The moderators asked whether Cory Booker wanted everyone to be vegan, and he rejected the premise. Climate change, as usual, did not come up until it was nearly too late. Asked on Thursday to address the country’s legacy of racism, segregation and slavery, and about his 1975 remark that “I’ll be damned if I feel responsible to pay for what happened 300 years ago,” Joe Biden said, confusingly, the following:

Biden: Look, there’s institutional segregation in this country. And from the time I got involved, I started dealing with that. Red-lining banks, making sure we are in a position where — look, you talk about education. . . . The teachers are — I’m married to a teacher, my deceased wife is a teacher. They have every problem coming to them. We have [to] make sure that every single child does, in fact, have 3-, 4- and 5-year-olds go to school. School. Not day care. School. We bring social workers into homes with parents to help them deal with how to raise their children. It’s not that they don’t want to help, they don’t know quite what to do. Play the radio, make sure the television — excuse me, make sure you have the record player on at night, the — the — make sure that kids hear words, a kid coming from a very poor school . . . (These were actual quotes, verbatim!)

Biden: (Stepping into the basket of a hot-air balloon.) Play the phonographs. Leave your gramophone on at night. Pump the pedals of your player piano. Don’t leave pies to cool in open windows. Don’t let your young boys — the dandelion wine.

Tell these kids — I see kids who, they don’t wait at the corner for the traffic cop’s whistle. Don’t let your young men tie their belongings into red handkerchiefs folded four ways into a bundle at the end of a stick and go hike along the railroad tracks. Or when they stop, be sure they stop at a soda counter. Send them to the nickelodeon where they can watch the newsreel and the feature.

We need doctors willing to put their stethoscope to a beloved dolly and listen for what ails it. And brother, you better watch out, because when that sister of yours grows up, you’ll be fighting men off with a stick! No dates until you’re 30!

Biden: America was not always like it is now. We had freedom from want, freedom from fear, freedom from ignorance. Platters full of turkey and smiling faces. Individual behaviors, not deep-seated institutional rot, are at the root of what is wrong, and we can fix it. Social workers will help. Listen to more records. Lawrence Welk. We used to be able to talk to each other, fireside chats. The boys went up in their rockets, and Ma watched in her apron and she was ever so proud. And the lights gleamed on the bandstand.

America can be in apple-pie shape once again. America was the way it only looked. We have to remember that. There was a time when people understood what you meant even if you didn’t say it just so. That time did exist, for everyone. Crystal radios. A skinned knee.

There is an invisible bar, and the men in the barbershop gather around the ticker to find out whether I cleared it, and, boys, I cleared it. I will never not clear it. I am floating far above it now. Bring the rockets, boys! Together we’ll soar through the night of an endless American summer that my campaign alone believes really did exist. When we could reach compromises with people who disagreed, even segregationists, but Barack Obama could still be our best friend. When the past really was the past. When people saw your heart and knew your heart. We can all dream together, the American Dream, and we’ll never need to wake up, skipper.

(With some difficulty, the moderators manage to puncture the balloon that is rapidly carrying Biden aloft in a dream of memory.)