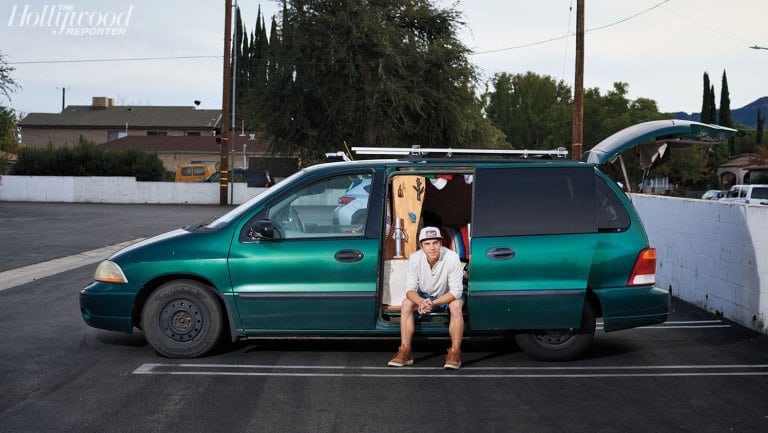 In response to exorbitant rents, many assistants, craftspeople and working actors are adopting a transient lifestyle, some by choice, some less so: “It’s hard for me to say this because I don’t think of myself as in need of help, but right now I need help.”

Even by Los Angeles standards, Noelle spends a lot of time worrying about parking. A writers room production assistant for a major streamer and script reader for a premium cable network, Noelle wakes up at 6 a.m. on weekdays to secure a spot close to her jobs in West L.A. After work, she moves her white, unassuming Ford Transit to another spot, carefully chosen to be located in a non-residentially zoned area without nightly parking restrictions and far away from any schools, daycare facilities or parks. She is constantly rotating these “day spots” and “night spots,” as she calls them, so as not to annoy neighbors or attract too much attention. These days, Noelle jokes, she’s more worried about a cop knocking on her window than getting “murdered or attacked.”

Noelle, 25, who is using only her first name because she signed a no-publicity clause for one of her jobs, is one of the 15,748 Angelenos currently living in his or her vehicle, according to the Los Angeles Homeless Services Authority. Their ranks are growing amid a worsening income inequality and homelessness crisis: As of January 2018, 9,117 vehicles were being used as homes, up 600 from 2017.

Damon Casarez
Noelle (who prefers not to give her last name for fear of employer reprisal), photographed Dec. 9 in Santa Monica, is a script reader and writers room PA who loves working in the industry but dislikes  L.A.

The entertainment industry, one of the city’s biggest and most capricious employers, counts a number of car dwellers like Noelle among its workforce. Though the precise figure is unknown, it’s a small but visible population. Of the 45 or so people hosted each night by Safe Parking L.A. — an organization that launched in 2016 and opened its first facility this year providing guarded, secret lots for vehicle dwellers to sleep in — an actor and a couple of part-time production or lighting professionals usually show up, founder Scott Sale says. Though LAHSA does not survey professions in its annual Homeless Count, community engagement manager Jonathan Hans says entertainment-industry types are a familiar group: “Especially within our younger population, it’s not necessarily uncommon that a group of young kids came out [to L.A.] because somebody told them that they would get them a record deal and then they ended up living out of their van,” he says. Many now-well-known industry figures — Tiffany Haddish, Chris Pratt, Drew Carey, Kelly Clarkson — have said they lived in their car before rising to fame.

Noelle, an Iowa native who graduated from Chapman University in 2016, can afford to rent a room in L.A. Still, she feels that even reasonable rents — her last place was a $600-per-month shared room — are too expensive. (She says her average monthly costs are $850.) Noelle initially wanted to switch to living in a “tiny home,” which generally takes up just 100 to 500 square feet and is often marketed as a more affordable way to own property. Still, even do-it-yourself tiny homes can cost up to six figures, so she found a more affordable solution on Instagram: living in a van.

Crashing in her Transit means “really living small,” she says. Noelle has one closet and says she’s constantly throwing things out. Her bathroom is a tiny portable toilet stashed beneath her hanging clothes (it is emptied at RV dump stations); running water is provided by 5-gallon freshwater jugs stored underneath her small sink. She, like many who live in their cars, showers at the gym.

The extra mobility the van provides is great for an entertainment professional who doesn’t love L.A., like Noelle (before the Transit, she often crashed in her car in Newport Beach or San Diego on weekends). But there are downsides to the itinerant lifestyle: Noelle tends to stay in one place on weekends because she’s afraid of losing her spot; she avoids driving at heavy-traffic times because she’s wary of even a fender bender — going to the auto shop, these days, means briefly losing the roof over her head. She’s heard street fights outside her van at night and keeps pepper spray and a taser on her in case she ever feels unsafe.

Joe Lepp, 27, a grip who works full-time on Amazon’s Sneaky Pete and lives out of his green Ford Windstar, started making the van his home in order to reach savings goals. After crashing in his Windstar infrequently while working at film festivals, Lepp moved in full-time when he relocated to L.A. nearly four years ago. Compared to those who live in cargo vans, Lepp has a relatively small space: After ripping out the minivan’s back rows, he added an elevated bed, now piled with a sleeping bag and blankets, a drop-down table for food (during the week, he gets three meals a day on set; he eats out otherwise) and a tiny bookshelf with volumes strapped in so they don’t fall while the van is moving. Two solar panels provide the space with 100 amp hours and power the string lights he’s hung around the top edges of the vehicle. He frequents a 24-Hour Fitness (lower-end gym memberships generally cost about $15 to $30 a month in the L.A. area) for showers and grocery stores and gas stations for toilets.

Lepp, who could have paid what he calls L.A.’s “outrageous” rents, estimates he’s reduced his yearly overhead by about $14,000 since moving in. Ultimately, he hopes to save enough to put a down payment on a house that he will rent out for passive income. “I want to get to my [financial] goals five to 10 years earlier than everyone else,” Lepp says.

Today, he’s confident enough in his job security that he tells co-workers openly about his lifestyle. As for dating, he says it’s a matter of meeting the right person: “I would say most people think it’s pretty interesting, and when they find out that I’m not doing it because I’m irresponsible and I’ve been forced into this, it usually goes down pretty well.”