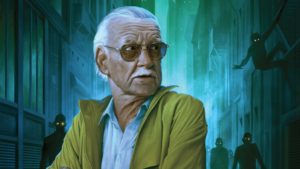 At Marvel in New York in the ’60s, he created the comic book characters that dominate the box office today. But at 95 and reeling from his wife’s death and a fight with his daughter, Lee stands at the center of a nasty battle for his care (and estate) as one friend pleads for help.

Back in early February, fighting what he later called “a little bout of pneumonia,” 95-year-old Stan Lee had an argument with his 67-year-old daughter, J.C. This was hardly unusual, but it seems to have been a breaking point.

The comic book legend — whose creative tenure at the helm of Marvel Comics beginning in New York in the early 1960s spawned Spider-Man, Black Panther and the X-Men and laid the foundation for superhero dominance in Hollywood that continues with the April 27 release of Avengers: Infinity War — sat in the office of his attorney Tom Lallas and signed a blistering declaration.

The Feb. 13 document, obtained by The Hollywood Reporter, begins with some background, explaining that Lee and his late wife had arranged a trust for their daughter because she had trouble supporting herself and often overspent. “It is not uncommon for J.C. to charge, in any given month, $20,000 to $40,000 on credit cards, sometimes more,” the document states. It goes on to describe how, when he and his daughter disagree — “which is often” — she “typically yells and screams at me and cries hysterically if I do not capitulate.”

Lee explains that J.C. will, “from time to time,” demand changes to her trust, including the transfer of properties into her name. He has resisted such changes, he states, because they “would greatly increase the likelihood of her greatest fear: that after my death, she will become homeless and destitute.”

The declaration then explicates how three men with “bad intentions” — Jerardo “Jerry” Olivarez, Keya Morgan and J.C.’s attorney, Kirk Schenck — had improperly influenced his daughter, a woman with “very few adult friends.” The document claims the trio has “insinuated themselves into relationships with J.C. for an ulterior motive and purpose”: to take advantage of Lee and “gain control over my assets, property and money.”

Lee’s estate is estimated to be worth between $50 million and $70 million (it’s been reported he receives $1 million a year for his Marvel ties). And while his primary role with the company is now mostly ceremonial — including a cameo in nearly every film — he remains a deity in fanboy culture. Despite the fact that his health requires nursing care at home and on the road, up until his most recent illness, Lee was a jovial regular at international comic conventions, where he can draw thousands of paying autograph seekers.