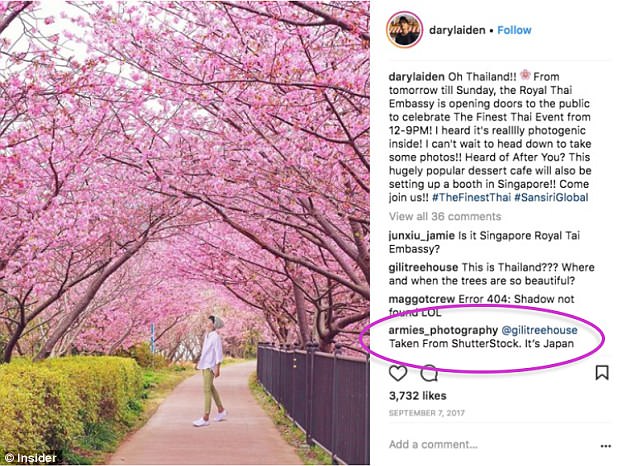 An Instagram star with 104,000 followers has been caught passing off stock photography as his own.

An Instagram star with 104,000 followers has been caught using stock photography and claiming it as his own.

Daryl Aiden Yow, a photographer from Singapore, admitted to posting the stock content after news site Mothership called him out, highlighting a number of examples.

In an interview with Singaporean newspaper Today, Yow had said that all the photos on his Instagram profile, which are bright, colourful, and showcase travel, food and fashion, were “shot professionally” by him.

“I’m a photographer and there are different expectations of me,” he said. “I’m a perfectionist when it comes to my photos. ”

However, Mothership wrote that after an anonymous tip, “We came to learn that for some reason, several samplings of his work look incredibly similar to that done by other photographers — and even some stock images.”

In most cases the original images could be traced back to sites including Shutterstock, CanStockPhoto, and Unsplash. The colour and composition of the photos had been edited, but the images were fundamentally the same.

One image of the Faroe Islands posted on his account in January 2017 was previously spotted by a reader on another Instagram account, @visitfaroeislands, in March of the previous year.

Meanwhile, a photo showing Santorini, Greece which Yow claimed to have “taken with the Sony A7RII” was found on Shutterstock — and was actually taken with a Canon.

On Thursday, Yow posted an apology on Instagram admitting to the accusations.

“The outrage regarding how I have conducted myself is justified and I accept full responsibility for my actions and all consequences that arise from those actions,” he wrote.

“Having marketed myself as a photographer, I fell far short of what was expected of me and disappointed those who believed — or wanted to believe — in me. For all of that, I apologise.”

Yow had gained fame through his association with fashion blogger and Instagram influencer Andrea Chong, according to Mothership.

According to the BBC, Yow had also been working with a number of big brands including Sony, Oppo, and Uniqlo — Sony had even promoted his work as part of a marketing campaign on the company’s website.

A representative from Sony told Mothership: “We are surprised and disappointed with what has been reported and are currently looking into this matter.

“Sony strongly encourages the art of creativity, however, we do not condone any action such as plagiarism and take a serious stance on it.”

Yow has removed all of his Instagram photos — other than the apology — since the Mothership article was published.

Even while writing this article, hundreds of images that were originally on the profile were being taken down.