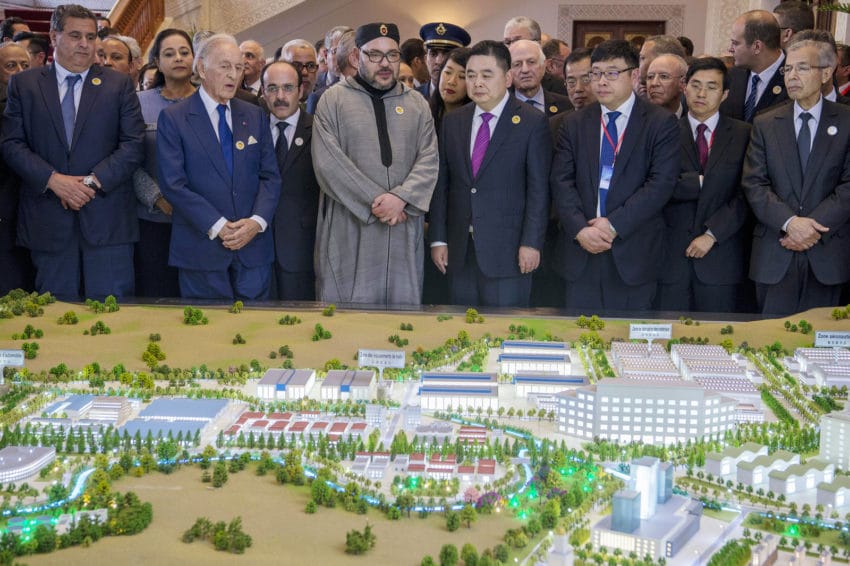 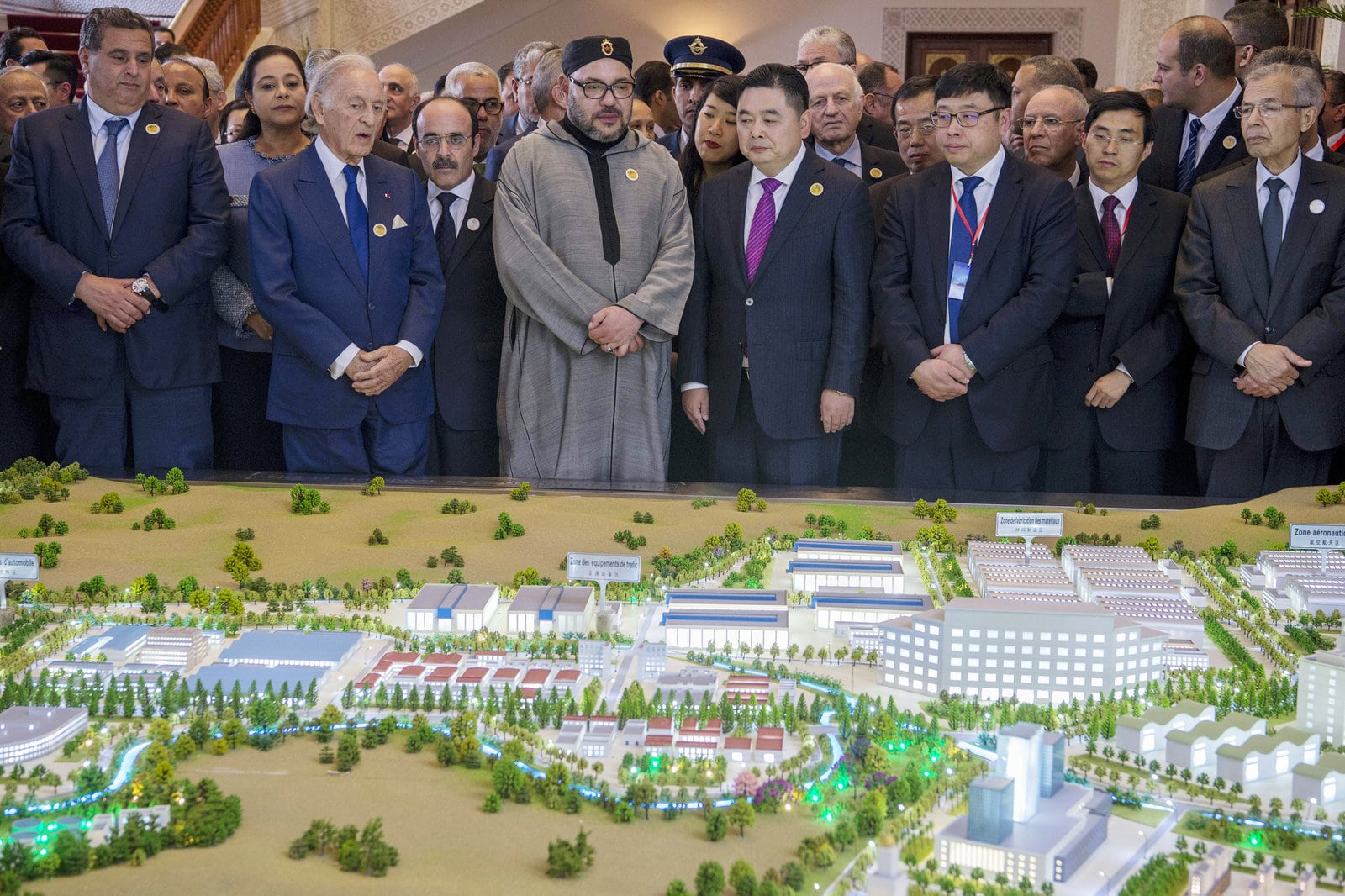 In the desert scrubland of Morocco’s Tangier region, a donkey laden with water bottles trots down a pebble lane chased by two small children. A farmer herds his cows in the near distance. Crickets leap in the dry grass.

It’s within these gently undulating hills, just inland from the coast, that China plans to build an entire city that will stand in monument to its expansion into a North African nation on Europe’s doorstep.

At a grand signing ceremony presided over by Morocco’s king in March of last year, Li Biao, the CEO of the Chinese Haite Group, outlined the ambition: a city of gleaming high towers and industrial zones that will attract as many as 100 Chinese companies and expected investment of $10 billion over the next decade. According to a promotional video, the area is expected to cover 7.7 square miles — about six times the size of Central Park in New York.

Moroccan King Mohammed VI and Li Biao, chairman of the Chinese Haite Group, are at the center of the launch of a Chinese investment project in Morocco, in March 2017.
Fadel Senna/AFP/Getty Images

The scale of the Mohammed VI Tangier Tech City project is in line with other sweeping infrastructure plans China is backing across several continents as part of an economic integration initiative Beijing calls a “new Silk Road.”

The idea for the city was first made public during a visit by Morocco’s King Mohammed VI to China in May 2016. Serenaded by a full brass band, President Xi Jinping and the Moroccan royal agreed to partner on everything from the environment to the military to the economy. 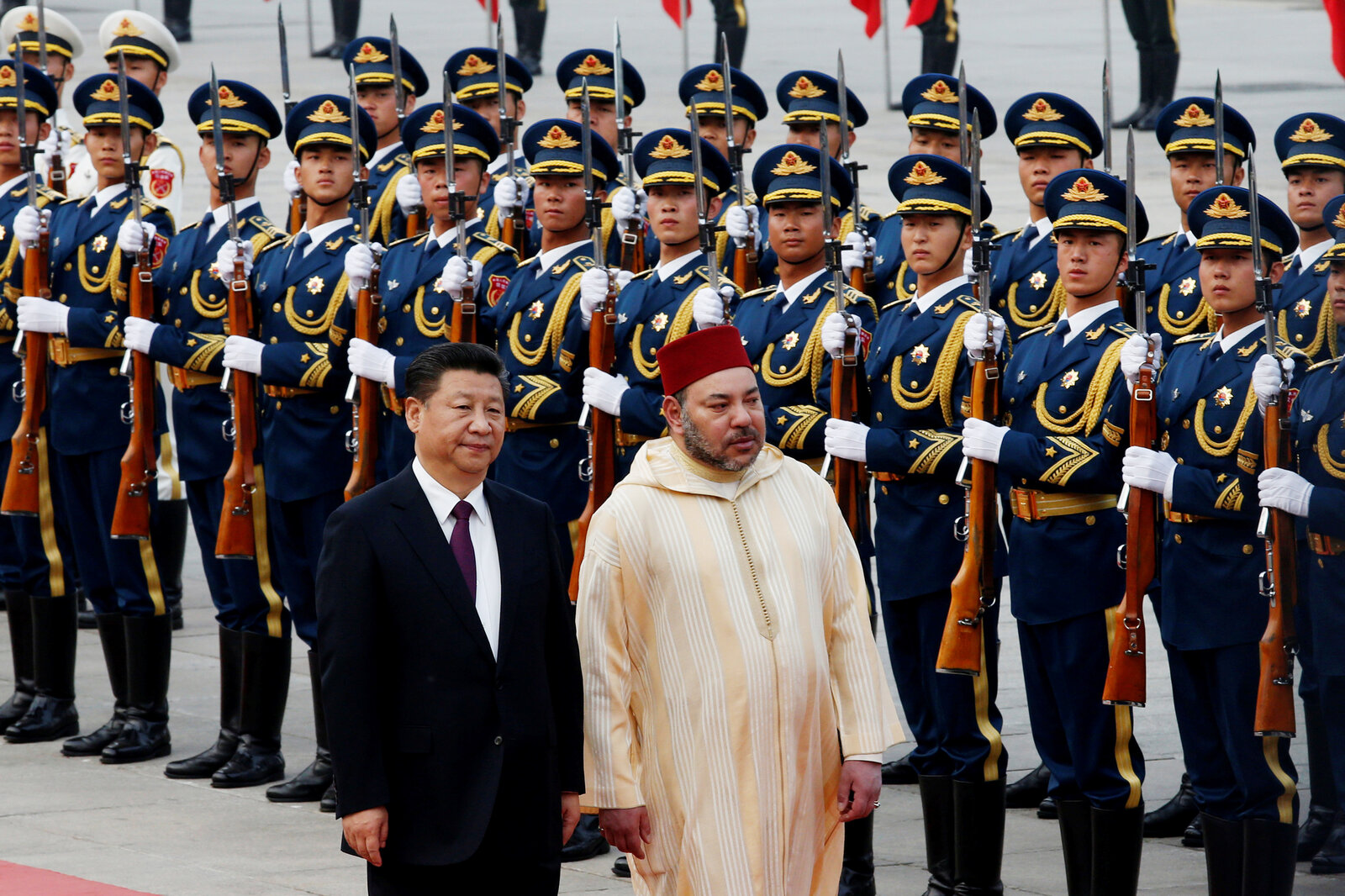 Chinese President Xi Jinping and Moroccan King Mohammed VI walk outside the Great Hall of People in Beijing in May 2016.
Kim Kyung Hoon/Reuters

In Morocco, Chinese language centers are being set up in several cities, universities have opened joint political institutes, and each nation’s state banks have opened branches in the other. China was even the guest of honor at this year’s Tan Tan Moussem, an annual gathering of Morocco’s nomadic tribes.

Chinese tourism to Morocco has skyrocketed, following a loosening of visa restrictions. “In 2013, we had 7,000 [Chinese] tourists. Last year, there were more than 120,000,” says Hayat Jabrane, the former general secretary of a Moroccan tourism industry association.

Jabrane now owns a travel agency that caters mostly to the Chinese. She says the government expects about a half-million Chinese visitors annually by 2020.

A growing number of those visitors, she says, are entrepreneurs looking for business opportunities in the country. “Today China means power in the world, you know,” Jabrane says. “I think we will win with China, and China will win with Morocco.”

For the moment, she adds, most of the Chinese businessmen she works with have private enterprises. They’ve come to Morocco to open factories for textiles or other goods to export. 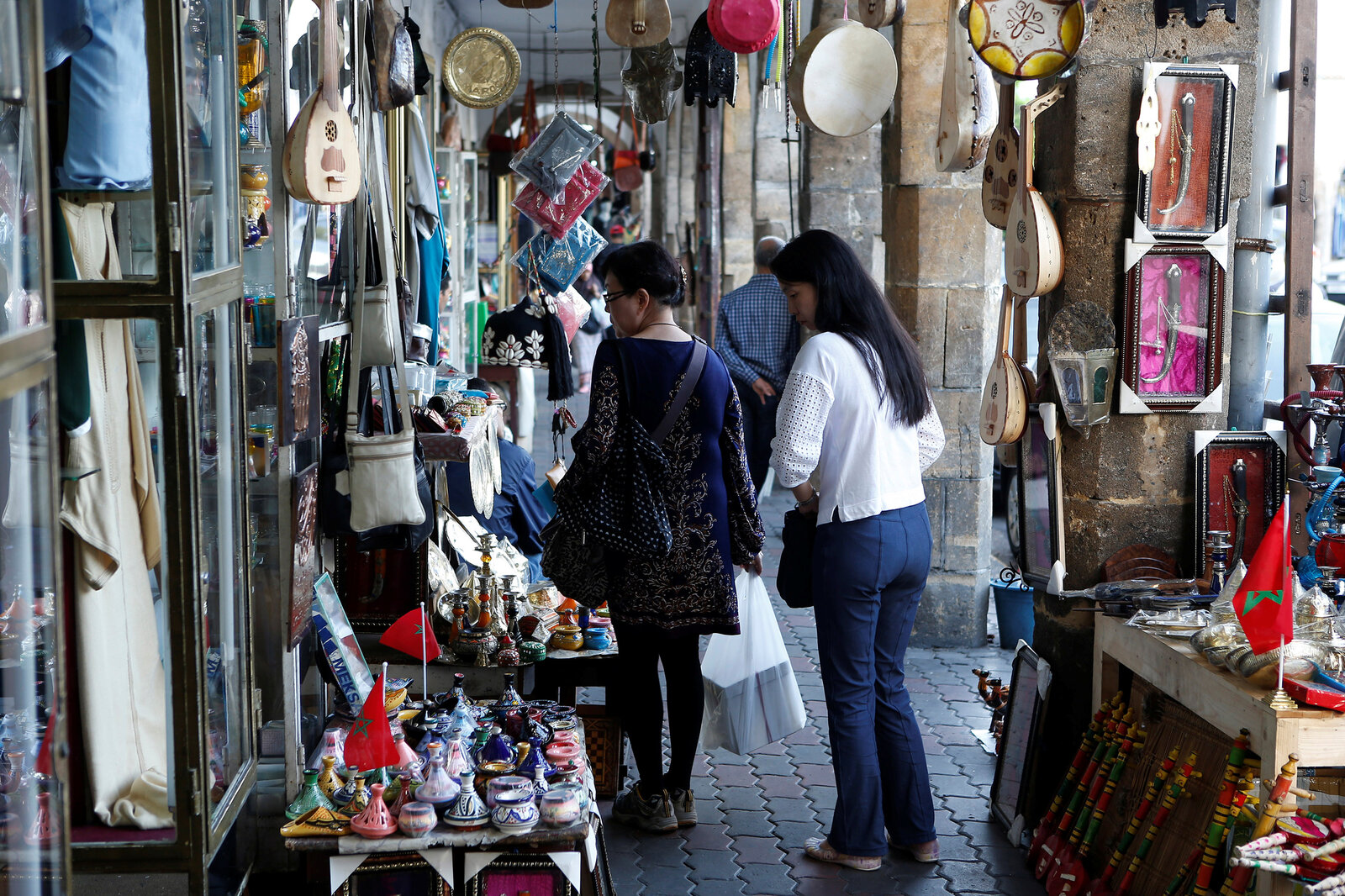 Chinese tourists browse at a shopping area in Casablanca in 2016. Chinese tourism to Morocco has skyrocketed in recent years, following a loosening of visa restrictions.
Youssef Boudlal/Reuters

Jabrane’s optimism about Chinese investment comes as Morocco positions itself as an industrial hub for other economic powers. Ravi Prasad, an analyst who has advised Chinese companies on investing abroad and tracks China’s ambitions at the blog Belt and Road, says China wants to take advantage of Morocco’s valuable free trade agreements with Europe and the United States.

“This tends to be one of the primary motivations for going abroad,” he says. “The fact that simply by relocating you can avoid a 15 to 20 percent tariff that might otherwise be imposed on your product.”

Morocco’s location is the other big attraction. Sharing a coastline with the Strait of Gibraltar, which links the Atlantic Ocean and the Mediterranean Sea, it lies just across the water from Spain and is a potentially valuable gateway into both Africa and Europe.

Plans for the tech city include different business areas, where companies can develop products for export to African and European markets. A slick promotional video boasts an aeronautics industry zone, a car manufacturing sector and a hub for renewable technologies.

However, since the opening ceremony — reported with much fanfare in Moroccan media — some experts say the project has stalled.

Moroccan industry minister Moulay Hafid Elalamy was quoted in the local media as saying the first factory would open for business in 2019.

But when NPR visited earlier this year, construction had not begun. The site for the new Tangier Tech City remained undisturbed arable land, with no bulldozer in sight.

Ali Amar, the editor of Le Desk, a Moroccan news site that has taken a close look at the tech city project, says he believes that the grand announcements were in part a public relations exercise and that the city is unlikely to be built on the scale it was first proposed.

“All the officials, they pushed to present this like something very big for the country. Something very innovative for our economic and social development,” he says.

The promotional video for the city describes a place that “integrates industry with urbanism.” It includes a “smart” residential area, where homes will be fitted with the latest technologies. Modern structures are set amid lush gardens. Greenways divide the city into 10 business areas.

He questioned the ability of Haite Group to carry out the promised development.

Haite’s website describes the company as an “enterprise group mainly engaged in the aviation industry and industry in China.” It does not appear to have extensive experience in city building, although it lists among its projects a “40,000-square-meter high-tech aviation zone” in Chengdu in southwestern China. 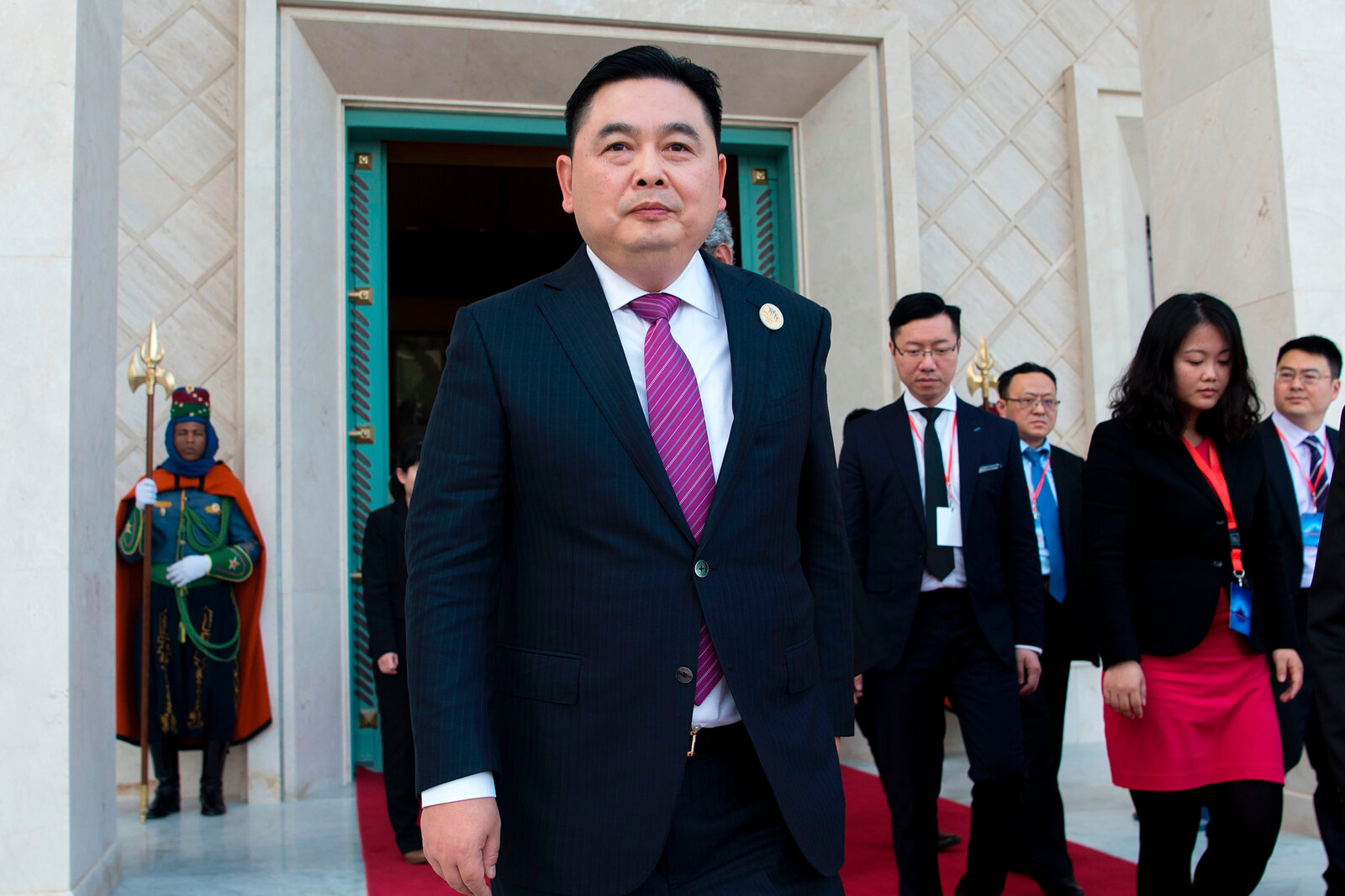 Haite Group chief Li Biao leaves a Moroccan palace near Tangier in March 2017. The extent of the company’s involvement in the Tangier Tech City project is no longer clear.

The Haite Group did not respond to NPR’s repeated requests for comment. But a source in the company, who spoke on the condition of anonymity because they did not have permission to speak to the media, acknowledged there are “problems” with the Tangier Tech City project and said the company has pulled out altogether. Another source close to the Chinese Embassy in Morocco said they also believe Haite is no longer involved.

Deborah Brautigam, an expert on China’s activity in Africa at Johns Hopkins University, says the Haite Group had not “come across our radar before.”

And she advised caution in believing the initial grand announcements of projects like these. “It’s not a done deal until you actually see some cold, hard cash flowing across the border,” she says.

“We’ve found in Africa that the [Chinese] companies that are sort of new or inexperienced, they are often the ones that have come with a sort of flashy introduction because they need to get attention. But that doesn’t mean they’re able to follow through.”

In Morocco, officials seem to have fallen largely silent about the project. The BMCE Bank of Africa, which is helping bankroll the project, initially agreed to meet, but then backed out and refused to respond to repeated attempts for comment.

The bank recently issued a news release saying the city project had grabbed the attention of several Chinese investors. It included no mention of the Haite Group.

Elalamy, Morocco’s industry minister, refused to say whether Haite was still involved, saying in a written statement that the identity of the investors is private — even though the project was first announced as a joint venture with the Haite Group. 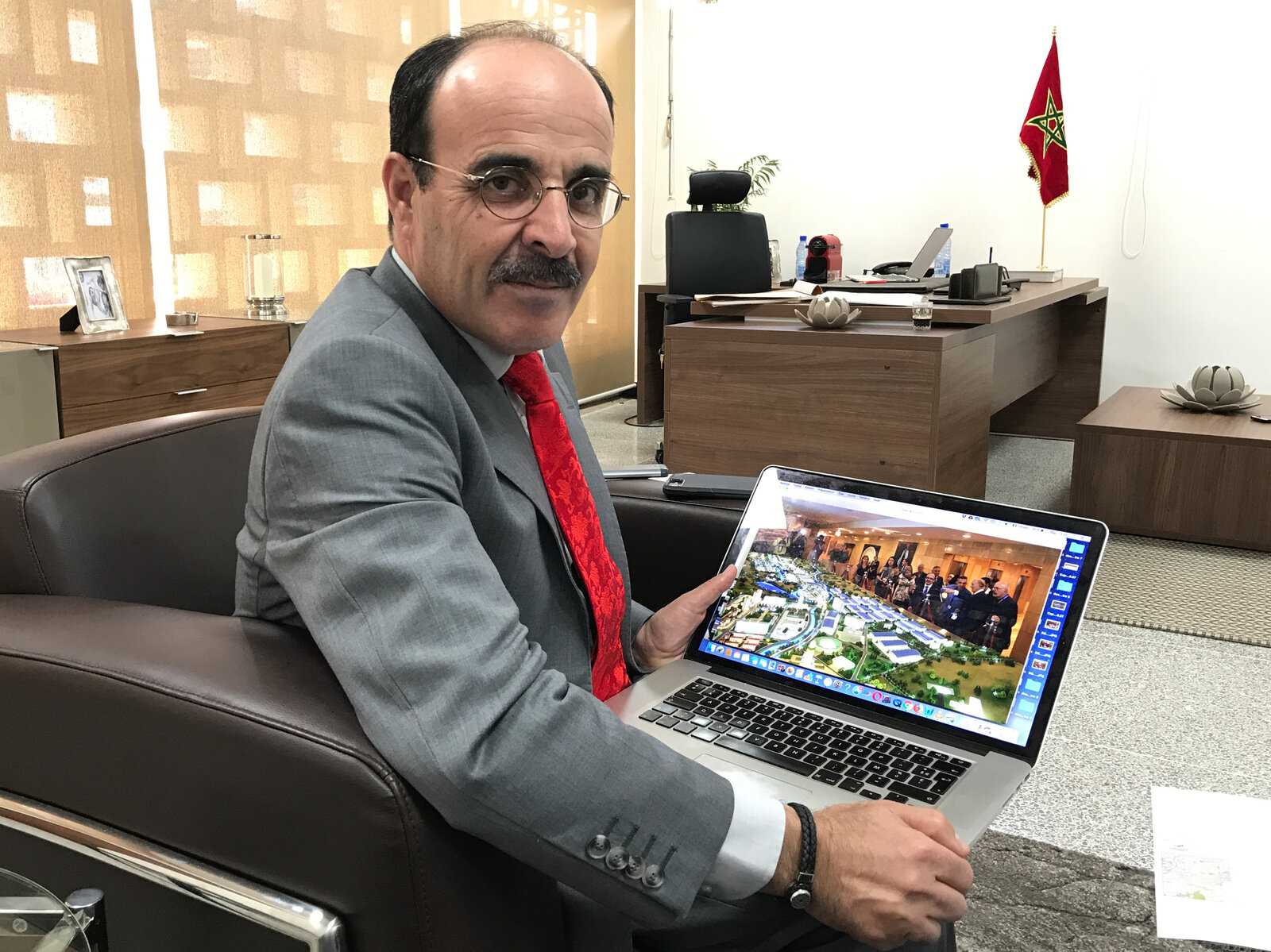 Ilyas El-Omari, the Tangier region president, says there was a disagreement between Morocco and the Chinese company Haite Group over who would own the city.
Ruth Sherlock/NPR

Of all the actors in the Tangier Tech City project contacted by NPR, only Ilyas El-Omari, the Tangier region president, agreed to talk. He obliquely admits there are problems with Haite and explains there was a disagreement between Morocco and the Chinese company over who would own the city.

“The company who will own the city and build it needs to be Moroccan. We welcome Chinese companies but only as investors,” he says.

He says there are lots of other companies from China and other parts of the world that are interested in investing. He insists the project will go on.